Occasionally, whether for financial purpose or expediency; something pretty good is embellished or modified. LEGALLY BLONDE was a 2001 ridiculously-concepted vehicle for Reese Witherspoon. Naturally (for Hollywood) there had to be a sequel, but fortunately, no franchise. What we do have is a musical version with forgettable arias by O’Keefe & Benjamin. 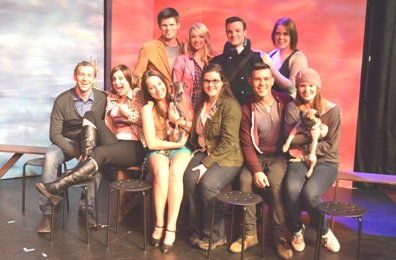 This iteration opened last night at the Lower Ossington Theatre under the direction of Tricia Lackey! We’ve had the unequivocally enjoyable pleasure of seeing her work at some of Sheridan’s presentations; this time out, the result needs more tweaking!

The plot deals with a Valley-girl-ish type who is jilted because BFM is going to Harvard Law and his future mandates an intellectual wife. She decides to switch from UCLA & become a serious Ivy-Leaguer. Right!! – lots of pink, a cute little puppy; and screaming. An overpowering orchestra, especially the keyboard; a cheer-leading section that is way too energetic and did I mention screaming? Should have said shrieking! I swear that the ladies were constantly at C-5 and I was concerned that their 1000Hz+ output was going to shatter my bi-focals.

That’s all the negatives, the play itself is well-acted and the cast members all contribute full measure. Mostly graduates from theatre schools like Randolph, Ryerson, and Sheridan; their superior training manifests itself in their thespian abilities, and more important, dedication to their art & the philosophy of no small parts. Everyone delivers.

There are some notable role interpretations. Hairdresser Paulette is portrayed by Heidi Thomas and she’s a scene stealer. Definitely over-the-top, her exaggerations just manage to stay this side of ham so she is still in the realm of larger-than-life. Her interaction with the UPS stud played by Trevor Williams (he of the magnificent bod) is a constant giggle. The star’s love interest is Sean Cage and he reads the role as credible and sincere. His interpretation is the most real and identifiable. The peak comedic depiction is by Aaron Wolfe whose Sandeep (gay or European???) is a hoot. Even in his chorus personas, he provides support. Vivienne Kensington is the upper-class snob who is the adversary & competitor of Miss Blonde. Marissa Dingle gives her just the right amount of arrogance and superciliousness to make her characterization parallel people we’ve all unfortunately met. Now, Ms. L. Blonde herself…ELLE WOODS (not the Tiger’s ex). Anna Hurshman has the looks, the demeanor, timing and facial mobility to carry the pivotal lead role. We’ve seen her in Sheridan presentations where she always exhibited that special quality that is noticeable to focused audience members such as yours truly. Hurshman expressively uses her eyes, but fortunately -never rolls them á la teenaged exasperation.

LEGALLY BLONDE is at the LOWER OSSINGTON THEATRE until Mar. 31st. It’s a fun evening, but ear-buds or plugs are a recommendation.