Hamilton’s WESTDALE UNITED CHURCH obviously concerns itself with its parishioners but also obliges the wider community…not to proselytize but to educate and enlighten. Its ‘Distinguished Visiting Speaker’ program attracts the most creative minds; even some that are not so-called mainstream. Last night’s guest was Rabbi Emeritus, Bernard Baskin who iterated for the five hundred audience, a thought-provoking yet factual elucidation of where; who and what Jesus stands for or really was to both his original people (us Jews); his early followers & apostles; and today’s one billion plus religionists. 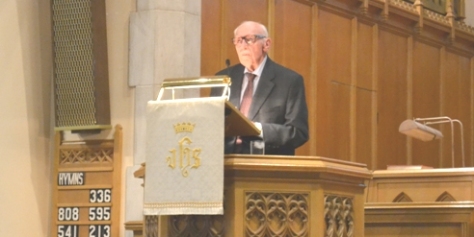 . Physical locales, routes and stopping places left as indelible mark as did the fossils of prehistoric times. So much so, that during Israel’s War of Independence (1948-49), biblical scholars were able to approximate locations of ancient oases for the fledgling IDF to bivouac. But, words & deeds were not so well engraved. Hence, interpretation, modification and theological amendments were made to overcome faulty dogmas. Jesus WAS Jewish; so were the gospel writers, and for three hundred years…his only converts. He may or may NOT have said his quotes; did or DID NOT do his miracles; was or WAS NOT actually a son-of-God. Thus, some doctrinal finagling became necessary. Did the Sun not set for Joshua…I don’t think so. Were the walls of Jericho disintegrated by trumpets…even Marsalis can’t replicate that! Methuselah’s age; Jonah’s encounter with Leviathan; David hitting Goliath in the head- doubtful, the nuts – maybe! But as Gershwin wrote; “it ain’t necessarily so”!

Religion is belief. We Jews, (some of us) are still waiting for a Messiah. Christians await His Second Coming. But, the world that J.C. promised, the Hebrew Scriptures advocated and the Koran desired all hope for love, peace and collaboration. Unfortunately, our psyches are such that what WE believe in is right, thus yours must intrinsically be WRONG. Baskin succinctly phrased it as an enigma, thusly “Precept vs. Practice”.

A fascinating and stimulating evening… Westdale United deserves credit for its audacious and open mindedness for staging such an evening & such a topic.