It’s a century since the ‘unsinkable’ sank so naturally there’s much buzz about the anniversary and the ‘Monday morning quarterbacking’ questions still unanswered. Jeffrey Hatcher’s play about a tabloid article describing the amazing location of a young woman floating on an iceberg dressed in early 20thcentury attire who has uttered only one word – ‘Titanic’. 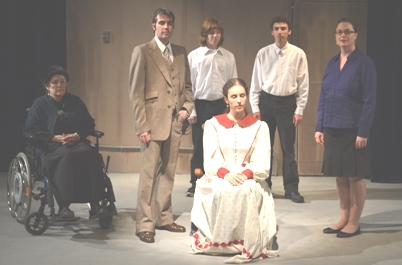 An American scholar; a psychologist and the last remaining survivor of the tragedy are all determined to debunk or discover the woman’s true background; albeit with their own individual agendas.  To discuss any more details would be a plot spoiler and unfair to this Dundas Little Theatre undertaking.
George Thomas’ direction is difficult for an audience. He uses extremely brief episodic vignettes with almost frustrating exit/entries by the three major protagonists. The inquisitor is dynamically portrayed by Jared Lenover whose intensity is almost tangible but is so passionate as to almost telegraph the denouement. A forceful Julie Gross is the medical person who attends and protects the young lady during the cross examinations and artifices being employed by the above. Gross has a talent for subtly showing her character’s frustrations. The known survivor has become a hermit and veteran community stalwart Maggie Thomas imbues her ‘Frances Kittle’ with humour and aplomb. The ‘woman’ is portrayed by Sanja Savic and during the first act she must convey responses strictly by facial expression, even her deadpans are effective. Stance and erect posture underscore indomitability of spirit.
The set is also nil. A ship’s deckchair & blanket, plus a table and chair are all there is. The mood is sterile and isolated. Coupled with two mute attendants (Aaron Jenson & Daniel VanAmelsvoort) who communicate with sign language; including one universal single digit expression; the only other prop is a PowerPoint rear projection. Effective background music contributes the icing.
There are numerous subtleties and insider jokes that might be easily missed. Even the play’s title has a secondary meaning. SCOTLAND ROAD was the nickname for the passageway aboard that permitted the steerage patrons to visit the hoi polloi and vice-versa!  If maintaining a constant intellectual focus and the ability to ignore relentless peripatetic comings & goings are part of one’s psyche, then SCOTLAND ROAD is a stimulating yet entertaining presentation. It’s at the Garstin Centre for the Arts until Nov. 3rd. Box office  905-627-5266