Patrick Dennis’ 1955 serio/comedy play that portrayed his radical aunt – Marion Tanner, was made into a blockbuster movie musical (Auntie Mame) for Rosalind Russell, then back into an on-stage musical. Along the way, plot changes and support character adds/removals naturally occurred. 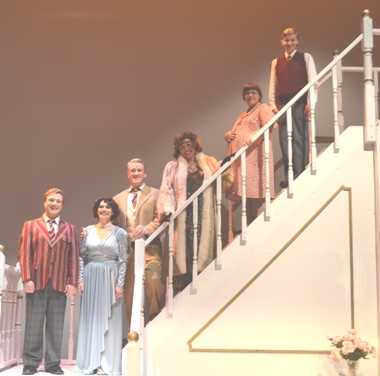 Clarkson Music Theatre, under director Danny Harvey brings a terrific cast and an amazing crew together to present a highly polished, professionally staged “MAME” to Mississauga’s Meadowvale Theatre. From the orchestral overture to final curtain; CMT’s effort entertains. A dozen musicians conducted by Bob Hardinge are almost faultless. The orchestra fortunately never overpowers the singers and dancers on stage. Sets are attractive & representational without overwhelming the audience with superfluous props. Lighting and sound are highly skilled in both intent and execution. The costumes; by Alex & Carmen Amini, are first-rate and representational of the pre-Depression flapper era.
The plot of Mame deals with a young boy –the author; orphaned and sent to live with his free-spirited and progressive-thinking maiden aunt. She’s a dynamo with an eclectic coterie of acquaintances and devoted friends. She’s determined that young Patrick will emulate her philosophy of life…something conflicting with the staid intentions of Young’s estate trustee – Dwight Babcock.
Director Harvey manages to keep his play’s progress and tempo flowing at never-waning pace. His incorporation of the numerous dance numbers flow smoothly and seem almost natural. He obviously has a talent for infusing his charges with the thespian details that help define & express their portrayals. In the title role, Leslie Carney is a stand-out triple threat…she’s a marvellous singer, instinctive comedienne and as an actor captures all of the ‘oomph’ that characterizes her persona. Carney receives strong support from the ‘young’ Patrick played with a somewhat bemused expression by MacKenzie Faulkner. The demeanor changes as does the portrayer with Chris Waldron assuming the more mature Dennis nephew. Waldron manages to still emulate some of the little idiosyncrasies that his predecessor demonstrates… obviously, another directorial contribution.
The mature love interest – Beauregard J.P. Burnside, is superbly portrayed by Derek Falconer. His super tenor voice and projection are obviously the result of extensive training and he has the style and demeanor worthy of any successful son of the Confederacy. Nope, he doesn’t meet her in Macy’s; instead she screws up his hand trying to become a professional manicurist! Mame’s buddies, Doug Feggans and Christine McMahon as Lindsay & Vera respectively offer strong support and contribute full measure to the play’s progress. Santiago Garcia is a charming ‘Ito’; Mame’s faithful & devoted servant, while Katie Westrope brings a ton of comedy to her Agnes Gooch interpretation. Another standout in the support category is Katherine Cordi whose mobile face and 1000-watt smiling façade are underused as Pegeen Ryan. She may end up with Patrick, but the audience deserves more stage time for her. She’s also the dance captain and Julie Gallie’s intricate choreography makes the big chorus numbers worthy of the price of admission alone.

The cast of MAME interacting!

W.C. Fields caveat about being on-stage with kids and pets again proves true. Adam Wilde is the 2nd generation Dennis who falls under Mame’s influence and exposure to the world. His play-ending ‘namaste’ to Mom & Dad for letting him travel with Mrs. Mame Dennis-Burnside is a hoot and also a bit of a happy tear-jerker.  Jerry Herman’s lyrics state that MAME  “♫ got the banjoes strumming; – made us feel alive again; have the drive again; & the South revive again. ♪”