There was a time when Hamilton had no real identity crisis. The myth of the lunch-bucket City relieved us of the dreadful responsibility of gazing at our navels. It was easy to believe that we lived in a town where anyone who wanted to work hard could get a job; and where our sports teams were as tough and gritty as we were. A thriving and satisfying arts scene was exploding in all its glory: down the road in Toronto. Here in Hamilton, people were still wearing the free T-shirts that came in beer cases.    Photo courtesy of James A. Chambers 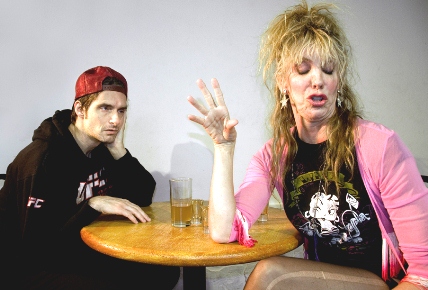 Much has changed, and we now have the luxury of trying to define who the heck we are, or at least who we would like to be.  Alas, like air travelers, we are partly defined by our baggage; there is no tabula rasa. We are what we were, to some extent; and we are also what others want us to be. We can’t escape our historical imprint, and we can’t outrun the upscale cultural remoras, [suckerfish- ed.] that will inevitably scrawl their corporate tags on our streetscape.
Sky Gilbert’s new play, Naked Hamilton, at The Artworld Artbar, explores the issues around the evolution of Hamilton’s core.  Nate, an offstage character who runs a bar much like the one in which the play takes place, has decided to publish a book of  nude portraits showing people from the community. He wants to emulate the similar collections made by artists in other, more prominent cities. He is visited by two very different characters who are interested in the project. The first, an oily, reptilian self-salesman from Toronto, is beautifully played by Scott McCord. Elly-Ray Hennessy enters next, a resident of the Mountain. She portrays that particular type of Hamiltonian who we all know and love; she is our co-worker or relative who never crosses the vast divide between the ‘burbs and (insert ominous, foreboding music here) downtown.  Through these characters, Gilbert airs many of the issues around development, gentrification and identity, and does it with a great deal of humour. I’m going to resist quoting here- I don’t want to spoil the jokes for you.
Nate’s final visitors are not at his photo call- but at his bar, and they represent an unwelcome intrusion from yesterday’s unsavoury urban reality. McCord and Hennessy re-appear, portraying drunken low-lives who have been patrons of the bar since before gentrification began. They are an outrageous exaggeration, but they ring true, probably because as Hamiltonians we have always suspected the worst about ourselves; we are second-rate and deserve to be.
Gilbert wrote this play with the Artword Artbar in mind. The building is at the core of the Core, and the issues of the play are also the issues which a business like this must face. Before the first actor hits the stage we are told that the fridge is about to be turned off and that the bar is about to become a theatre. In the final act, the characters rampage around in the theatre, oblivious to any change; in their reality; this is still a bar. The audience, like the engaged citizens of Hamilton, find themselves straddling two realities.
This is a production which sets the mind to work. It presents some fun; some interesting scenarios as a jumping-off point, and reminds us that the revitalization of the Core has only just begun. It warns that there are many players, with differing viewpoints and agendas.  It made me worry… now that the CBC is here, can a Starbucks© and The Gap© be far behind? It also made me feel defensive… why not put a casino in Ancaster or Burlington instead of here?

‘Naked Hamilton’ entertains, engages & provokes, and it does it in fine style, with terrific, believable acting and witty, acerbic dialogue. And it’s about us; what more could we ask? “Naked” runs until Nov. 25th, clothing not optional!