Nobody can beat the classics, and one can’t get much more classical than good old William Shakespeare. Hart House’s production of TWELFTH NIGHT puts a new age spin on the play, setting it in a New England style of pub, very reminiscent of something you might find in the Maritimes, and keeping all of the action within the pub.        Photo courtesy of Andrea Wasserman 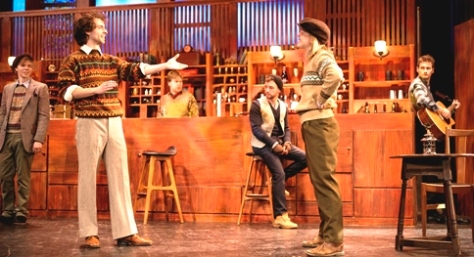 Cast of the Hart House take on 12th NIGHT

It is the classical tale of a woman who hides her identity to get close to a duke and but the process quickly backfires on her …all in a contemporary setting.   Being one of my favourite Shakespearean plays, this writer was very excited when initially invited to see it— I was not disappointed. Be assured you won’t be either.
Lighting designer, Raha Javanfar creates a stormy mood just outside the pub, solely through sound and illuminations. With her clever use of stylized window lighting, she manages to create the illusion of rain streaking down the windows. Jenna McCutchen, set & costume designer, and a fellow York University student, took a new approach to the royalty by dressing them as commoners. The duke appeared as an average chap, only slightly-richer-than most townsmen, which was a fresh outlook on the normally very stuffy character.
Playing the heroine turned page Viola, was Arlin Dixon. Her performance was one of complete devotion. When she first walks on stage as 0rsino, I hadn’t realized she was a girl until later in the scene. Scott Farley, in his Hart House debut, plays Malvolio, in an extravagant and very entertaining fashion befitting the flamboyant and outlandish character.
I would now like to call attention to how tricky re-imagining and staging a Shakespeare play can be. Telling a story that many people already know sounds easy. That being said, it can easily be botched if done incorrectly; and turn into a disaster.  The cast of Twelfth Night does a stellar job of performing this play; the direction is precise and very creative… I highly recommend seeing it.