New works are always a gamble, especially on opening night. You never know how an audience is going to react; what could go right, or horribly wrong. That’s a risk all live performances take, so that just adds to the thrill of going to see a show. Any new work is subject to re-writes and revisions, but there is potential in what is being written. Repetitive Strain Injury by Rob van Meenan is no different. 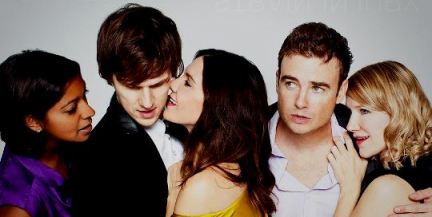 the protagonists of REPETITIVE SPRAIN INJURY

“Repetitive Strain Injury” is the story of a soon-to-be-wed (and later on wed) young couple David (Pat Kiely) and Julie (Amy Matysio) who, like all of us, argue and use sarcasm to deflect from actually answering each other outright. Julie eventually starts talking to a telemarketer named Pia (Imali Perera) and they soon become great friends. Meanwhile, Dave is with his rather unpleasant friend Guy a major jerk, but we all have at least ONE friend like that, portrayed by Robin Dunne. Guy tries picking up a girl at the bar, Candice (Ava Markus), for a one night stand. Over the course of the play, themes such as exploration of self, finding your place in the world and the struggles of making peace with your past are discussed. The writer was also most likely watching ‘The Matrix’ while writing this, because temet nosce kept creeping into the dialogue. So much so, that I reached a point that felt like I was watching something from my high school days.
I normally don’t like to comment on an actor’s abilities, but pairing wise, Dave and Julie just didn’t click as scene partners, or a couple that was supposed to be married, or as a couple in a relationship long enough to be considering marriage for that matter. Kiely and Matysio were unfortunately rather awkward with each other, especially with any kissing scene and did a surprisingly poor job of convincing me that they “loved” each other at any other point in the story. If anything it reminded me of when high schoolers are forced to do anything remotely romantic on stage against their instincts. On the other hand, Imali Perera stole the show with her performance as Pia. She commanded attention in a quiet, wise and confident way that kept me wanting to see her on stage more, and made me wish her scenes would not end.  There was incredible chemistry between Pia and Julie that carried the rest of the cast throughout the show.
I consider myself an advocate for people to formulate their own opinions on any new creation. Even if one critic doesn’t like a new piece that doesn’t mean there isn’t room for improvement. All new ideas need tweaking and a venue such as the Factory Theatre is the perfect place to show case new material. I would personally love to see what van Meenan has to show considering the potential it has, to be a memorable piece of Canadian theatre.