He only wrote one violin concerto, but like his 6th symphony; the Bagatelle; sonatas 8 & 14; quantity is secondary to quality. The D-major op.61 with its thematic opening notes that reprise throughout the 23-minute allegro opening are, and will remain, timeless *. Over a half-century ago, I heard the late Henryk Szeryng perform this piece with the Montreal Symphony Orchestra. Last night Jacques Israelievitch gave an outstanding reading of the same work. Connection – Israelievitch was a student of Szeryng’s! 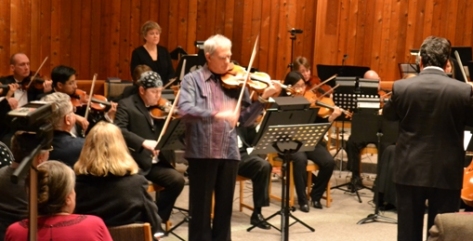 Israelievitch & the O.C.O. in performance

Naturally, on making the recollection; these eyes began to tear up.
The Oakville Chamber Orchestra was for the most part, in superb form. Clarinettist Greg James was stellar in every solo and was ably supported by Samantha Benjamin in the wind duets. Alas, the brasses showed both tonal and technical imperfections.  The interpretation by both the guest soloist and conductor Charles Demuynck was tender and understated without any annoying drama or histrionics.  No liberties were taken with tempi or emphasis…the composition and performing talents were sufficient.  Israelievitch cherishes every note, unlike Stern et.al there is no slurring and his deliberate style is the string equivalent of Kuerti’s famous right hand.
The short (approx.9 ½ min) 2nd and 3rd movements – larghetto & rondo were played as one, gently segued by the conductor supported by strong flute & oboe contributions. The larghetto is notated ‘attacca’ which instructs the performer to immediately begin what is to follow. Ergo, it was the composer himself who suggested this musical bridge.
Israelievitch’s instrument has a strange warp-like marking on its left shoulder. I learned that it is a knot that makes the violin easily identifiable and thus a guarantee against any larcenous intention. Tonally, she is as warm and pure as any Amati, Guarneri or Serafin. Of course, any instrument is only as musically perfect as her recitalist.  A critic’s perk: – the honour of hosting the guest soloist for the post-interval rendering of the Brahms ‘Serenade in D major.
Demuynck’s introduction to the work made slight inference to the composer’s relationship with the Schumann’s …especially the nympho rep of Clara. Sort of a manage-a-trois similar to that of Glen Campbell with his buddy Mac Davis’ wife Sarah! Loved Demuynck’s subtle mention of using ‘conceived’ instead of envisaged.  The work itself is in six movements with No. 4 actually being two minuets.  Once again, the clarinets were called upon for yeoman effort, especially in the opening allegro where they thematically lead the flutes and pizzicato strings. There are some melodically dragging movements especially the adagio 3rd which would have benefitted from a little more ‘troppo’; and both segments of IV. Consequently easily conceivable to see why the work is not usually played in its entirety, rather we hear it segmented.
Overall impression…the Oakville Chamber Orchestra has never made the O.A.R.’S TOP TEN annual list. Last night’s concert was a definite contender for 2014!

Note*   the opening bars of the Beethoven D-major violin concerto…