Review by Danny Gaisin: (at The Prince of Wales, N.O.T.L.)
J.B. Priestley had an insightful sense of humor. He appreciated the perversities of life as well as its ironies. Both of these anomalies are amply displayed in his “WHEN WE ARE MARRIED”, [still in Previews] which comedically analyzes three couples who are celebrating their same-date 25th anniversary…except the minister may have been unauthorized. A second chance, or a need to re-confirm –aye, there’s the rub! SHAW’s talented director Joseph Ziegler manages to capture all the comedy as well as the social nuances of the era and society.   Photo courtesy of David Cooper

The hats come off, and the s*+t is about to hit the proverbial fan

END_OF_DOCUMENT_TOKEN_TO_BE_REPLACED

The Charity That Began At Home at the Shaw Festival is a rollicking satire on upper-class philanthropy. It makes fun of the reasons why the rich are kind to the poor and emphasizes the profound differences between the social classes in a manner only the British can do. But this is not John Clease. Although Fawlty Towers makes me roll in the aisles, St John Hankin’s play from 1906, doesn’t.      Photo courtesy of David Cooper 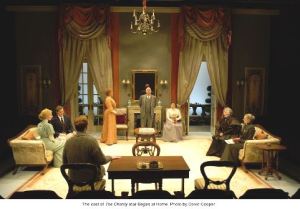 END_OF_DOCUMENT_TOKEN_TO_BE_REPLACED

Guest conductor Jean-Philippe Tremblay succinctly described the musicians of our Hamilton Philharmonic as perfect. Easy to work with; dedicated; and sufficiently resolute that four rehearsals sufficed. Given the challenges and tonal descriptions of the concert’s subject matter – The Sea, he was not being facetious.
The opening Mendelssohn ‘Calm Sea and prosperous voyages’ piece was technically faultless; even tempered and non-innovative. Then, Britton’s directorially challenging ‘Interludes from Peter Grimes’. Tremblay selected four of the half-dozen descriptives and transitionalized the themes; codas and solo slides with fluidity.

Tremblay connecting with his HPO audience