Editor’s Note: The following concert took place last week but the critique could not be (technically) uploaded until today. Apologies.  ETG

Maitrise Des Hauts de France, young singers of Lambersart, gave a concert At St. Thomas’ Catholic Church in Waterdown on Sunday evening. Francois Verschaeve was their translator/ interpreter for their North American tour and in exchange requested a concert in his home town of Waterdown.  He promised Father Lobsinger of St Thomas’ that he would fill the church for it – he got his wish on both counts. The choir was led by Conductor Jerome Cupelli and accompanied by Martine Betremieux on piano or organ. 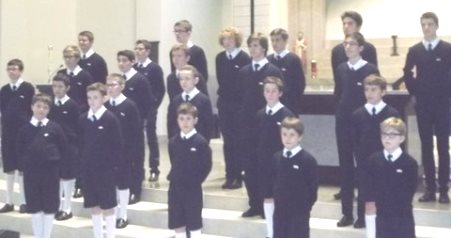 The choir performing in Waterdown

The first two songs sounded over controlled as though they were singing for a European choir competition, but then came La marche des Rois by J.B. Lully, a difficult song which they sang marvelously. There were some excellent individual voices in the choir, but the overall impression was of a lovely blending.
The choir contained the full register of boy soprano, alto, tenor and bass voices and the thirty singers ranged in age from about 8-yrs old to adulthood. Some came forward to sing solos, quartets or ensembles and at one stage the choir split in half to sing as two choirs. They easily managed Bach’s Jesu, bleibet meine Freude in German and Handel’s Laudate Dominum in Latin.   It did sound quaint though to hear Danny Boy sung beautifully in English with a French accent. During intermission some of the choir members played the piano or the organ and showed their musical range. The final organist was so small we couldn’t even see him until he stood up! After intermission the boys seemed more relaxed and appeared to enjoy the music more. They sang an American Spiritual, “Soon ah will be done” and absolutely nailed it. The audience really responded to it too and that energized the choir. The remainder of the concert was one great piece after another until climaxing with Exultate justi by da Viadana sung as solo and choir which merited a standing ovation. The choir exited while singing us a lovely encore. This was the final concert on their current tour.