Alan Ayckbourn’s 1980 play about a socially flawed and deviational group marking the Christmas holidays together is both a commentary on mores and an observation of dysfunction. The related faction tolerate rather than like one another; the friends are sycophants that must stomach rather than appreciate their hosts. Under a weak director, SEASON’S GREETINGS would simply be another iteration of stereotypes; under Ron Cameron-Lewis, the play illustrates the full spectrum of humor to pathos. It’s worth the drive to Richmond Hill.

an “OOPS” moment in ‘Season’s Greetings’

The first impression on entering The CURTAIN CLUB’s theatre is the set; or should one say Set; Set; & Set. The Corcoran & Scott stage even utilizes both wings and is as detailed and realistic as anything SHAW or Stratford could create. For the 1st time ever; this writer actually went on stage during intermission to take three shots of the décor. Enhance with a strong cast and thus our recommendation above.
The homeowners are Neville and Belinda; a successful store owner who likes to tinker and his wife who is obviously bored with the marriage. Aaron Sidenberg`s portrayal is not as definitive as Andrea Vander Kooij who seems to exude sensuality as well as impatience. The parental NRA enthusiast is Kingsley Owen and he is pivotal in many of the sub-plots. His antagonist contemporary is Bernard, an ineffectual doctor and lousy puppeteer who distains any advice, preferring to subject his on-stage audience (and us), to a mind-numbing show that is hilarious given his obtuse dogmatism. Phil Dionne (Bernard) is married to Phyllis and Angie Sapalovski interprets her with many of the same characteristics. Dionne`s persona reflects someone most of us will recognize in our own lives. Just wish he wouldn`t mince (something akin to flounce & I hate flounce) 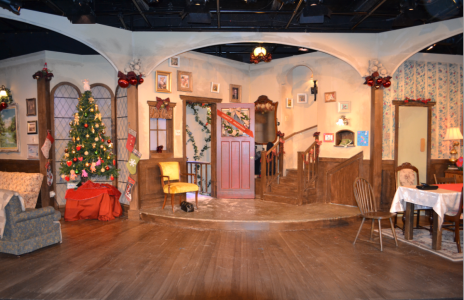 A scene-stealer whose activities always distracts from the fore-stage goings-on is Daniel Staseff who incorporates his similarity to Big Bang’s Johnny Galecki both in mannerism and posture. He’s a delightful distraction as he upstages his counterparts. His pregnant wife is Jenn Worsnop-Sellers and her interaction with her husband and the other cast-members rings authentic. The other couple is Belinda’s sister Ash Burke and her boyfriend Clive played by Michael Knutson. She’s a little too naively virginal for credibility; but Knutson’s critical role as her writer boyfriend owns the show. More than somewhat a double for Elyes Gabel (the ‘Walter’ character on TV’s SCORPION); he demonstrates a range of personality as re connects with each of the other members of this coterie. The role is paramount and Knutson aces it. One character actually asks “Why does sex always go spoiling everything?”  To learn the answer, see SEASON’S GREETINGS before Dec. 5th!  Call 905-773-3434

Personal addendum: The saying ‘One can never go back’ isn’t a truism. Twenty-five years ago, we moved from Richmond Hill and thus my reportage on performances of Curtain Club presentations for the Thornhill Month Publications syndicate came to an end. But my assigned seat still has its brass marker attached to the fourth row armrest. I sat there last night! The purchase was in acknowledgment of ten years (& fifty plays) of critical reviewing.