Akin with the majority of theatre and concert goers, there have been occasions where a performance is so below par that one has opted to leave during intermission. Last night’s Hamilton Philharmonic performance was the diametric opposite; we wished we could have omitted the opening segment completely and just returned for the post-interval! Vaughan-Williams ‘Lark Ascending’, performed by violin soloist Lance Ouellette, displayed why the piece consistently makes the Most Boring Top Ten listings.   Like most Lightfoot compositions, the piece is repetitious; tedious and interminable.

END_OF_DOCUMENT_TOKEN_TO_BE_REPLACED

According to legend, back in 1990, renowned theatre director and teacher, Ron Cameron-Lewis was doodling with his paper napkin during a preliminary exploration meeting about a combination of the UNIVERSITY of TORONT
O’s Mississauga Theatre program and SHERIDAN COLLEGE’s Trafalgar campus counterpart. Like the fabled fourteen minute cab ride during which lyrics for “Anything You Can Do” (Annie get your Gun ’46) were composed for Irving Berlin’s catchy composition; Lewis came up with a prototype that became a successful marriage.  Another epiphany moment that has stood the test of time. 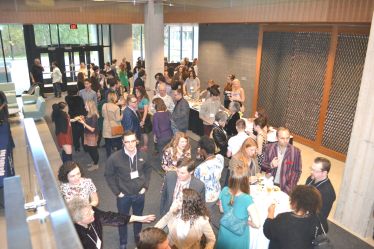 Overview of the 25th Anniversary celebrities & past alumnae/professors