Review by Judith Caldwell
If the mention of Handel’s Messiah conjures up images of a huge choir trying to drown out the organ while they belt out choral pieces, then I have news for you, there is a much more nuanced and approachable version available; last evening the 13 voice choir of professional singers called Musikay plus four soloists and a nine piece orchestra – including the necessary trumpets – offered a precise and thoughtful rendition under the direction of Stephane Potvin. The soloists; soprano Catherine Arcand-Pinette, Madison Arsenault, alto; tenor Michael P. Taylor, and Maciej Bujnowicz, bass were wonderful. 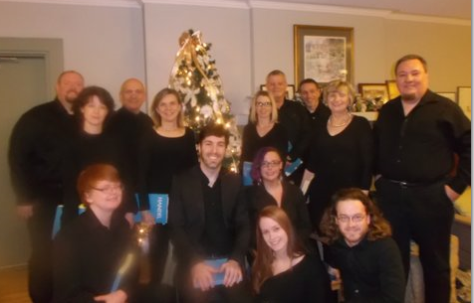 Arsenault and Taylor in particular sounded absolutely right for Handel and Bujnowicz handling the bass vocal gymnastics admirably. Arcand-Pinette offering a beautifully balanced ‘I know that my Redeemer liveth’ with a mix of certainty and amazement.
The Messiah is a work in three parts. The long Part 1 opens with the Overture, a stately procession, in E minor – the key of despair, but immediately comfort is offered by the tenor and there is the announcement of great things to come. Then there is the section of hope with the bass shaking things up; the alto refining in fire and the choir cheerily telling good tidings; and people walking in darkness to unison singing until they see a great light accompanied by glorious harmony. This all leads up to that marvellous anthem ‘For unto us a child is born’ which heralds the arrival of the Christ child. The balance of Part 1 is joyful as shepherds, angels and members of the flock all rejoice. Each of these solos and choruses were treated carefully and respectfully to properly reflect Handel’s intentions.
Part 2 is the Passion section, it begins with another stately, majestic processional followed by a mood change as the alto tells us ‘he was despised’. From there the music becomes much more dramatic, at times mocking, then jagged and disjointed and then ‘all we like sheep’ wander around in circles getting lost as Christ dies. This section ends with the great resurrection ‘Hallelujah’ chorus in majestic D major – probably the best known part of this whole Oratorio.
Musikay offered a really clear and rousing version which the almost capacity audience loved. One might think it was all downhill from there, but Handel lets us know there are still a lot of musical goodies in store by opening Part 3 with the soprano solo ‘I know that my Redeemer liveth’ leading into all the post-Easter rejoicing. The audience gets a rousing chorus ‘Since by man came death, by man came also the resurrection’, the wonderful declaratory bass solo ‘the trumpet shall sound’, and an alto/tenor duet ‘O death, where is thy sting’, all leading up to the final anthem ‘Worthy is the Lamb’ – another majestic D major offering. The whole Oratorio wraps up with a huge Amen section which often sounds fuzzy, but not this time. It was slow and blended with all four parts standing out clearly. This was an emotional and passionate Messiah with clear enunciation and varied colouration that made you think and feel the words. The next Musikay concert is ‘The World of Dufay’ on April 16th, 2016 at St. John’s United.