Although the 5 at the First Chamber Music program’s title, Different Romances, conjures up the idea of sweetness and light, the concert on May 21st in Hamilton was anything but. The music was stormy and angst ridden, passionate and even angry. The masterful music of Shannon Mercer, soprano; Andrew Burashko, piano; Yehonatan Berick, violin; and Rachel Mercer, cello made the audience think about what it means to be human and connected to one another.
The afternoon began with Annie Kang, a youth guest artist, playing The Sea by Selim Palmgren on the piano. 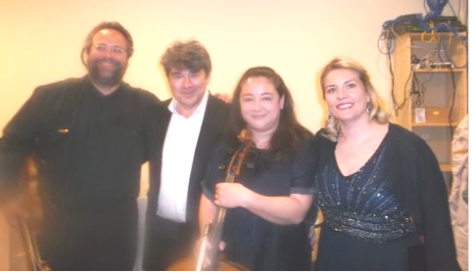 This composition was very evocative of the ebb and flow of waves and the swell of the surf. Kang played beautifully, and although she seemed shy, she had stage presence.
This was followed by a Canadian composition by John Burge titled Pas de Deux for violin and cello (2010). Burge is currently teaching at Queens University and is a prolific composer whose works deserve to be heard more often. The Pas de Deux was a love duet which included passages of discord. Stormy, powerful and passionate moments were followed by lovely lyrical parts, in which both instruments ultimately ascended to ethereal heights together. Berick and Mercer obviously enjoyed playing the Burge which should be a favourite for all violinists and cellists. The audience loved it.
The major presentation of the afternoon was ‘Seven Romances on Poems by Alexander Blok’ Op.127 (1967) by Dmitri Shostakovich. Shannon Mercer sang the seven poems in Russian accompanied by varying instruments. Ophelia’s Song (cello) about faithfulness was sad and longing; Gamayun, the Prophetic Bird (piano) was dramatic and evoked terror and anger; We Were Alone (violin) was a plaintive love song; The City is Asleep (piano, cello) was pensive and hopeful; The Storm (piano, violin, cello) was dramatic, loud and demonic; Secret Signs (violin, cello) was calmer but apprehensive; and Music (piano, violin, cello) began in a mournful torment which ultimately subsided into a possible acceptance. This music is not for the feint of heart, but it was utterly riveting, and left the audience in thoughtful silence for a minute before it erupted in appreciative applause.
The afternoon was completed by another Shostakovich, Trio #2 in E minor, Op 67 (1944). Although this was composed under the then very watchful eye of the Politburo it made it past the censors because the Nazis were cast as the demons. The Andante Moderato started thoughtfully and became lively; the Allegro con brio was so lively it was almost frenetic. Then came the eight powerful chords that began the Largo and the whole piece gravitated in a darker direction. The Largo was achingly beautiful but those same eight chords in the Allegretto began with a ghastly parody of the Jewish folk dances victims were forced to perform before being shot by the Nazis. This is powerful music which forces us all to think about our inhumanity. Again the audience was silent for a time before giving a well-deserved standing ovation.
The 5 at the First Chamber Music Series 2016/2017 season begins again in September.