Drayton Entertainment’s production of Norm Foster’s quirky comedy, Hilda’s Yard, conjures up the spirit of 1950s – focusing on a middle-class family – the Flucks. The play opened on Thursday at the King’s Wharf Theatre in Penetanguishene with an impressive company of six that kept up a snappy pace within an exceptional retro set design by Ivan Brozic.
This lovely setting is where empty nesters Hilda and Sam Fluck, played by Patti Allan and Brian Linds, find renewed intimacy after their two grown children have finally left home. But their spooning and dreams of buying a pricey first television set to watch Gunsmoke are cut short.  Photo by John Sharp 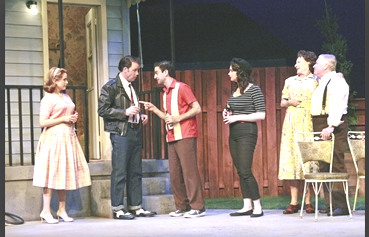 Some of the denizens of HILDA’s YARD

First distraction …their son Gary, played by Alan Kliffer, clambers over the fence to reclaim his spot in the familial home. He has lost his job and owes money to a bad man. Before Sam and Hilda recover from that shock, his sister Janey, played by Ella Simon, bursts onto the scene, suitcase in hand. She has left her husband.
While the set, costumes and lighting evoke an era of simplicity and wholesomeness, the characters and story remind us of a complex and sometimes dark family dynamic that transcends time. Allan really understands Hilda and channels her with humour and affection. While she has always been a dutiful housewife, Hilda has learned to think outside the box, and is cleverly effective at sorting out issues for win-win solutions. She is the glue that binds the family, mends fences, and bridges generations. Her husband Sam, who believes father knows best, nevertheless bows to the woman who is queen of the home patch and his heart.
The performers bring these classic characters and themes to life with humour and vitality. Their amazing delivery of period vocabulary puzzles the parents and amuses the audience. Gary’s lady love, Bobbi Jakes, peppers the conversation with modern words and phrases that clearly establish her as a hip cat. Played by Steffi DeDomenicantonio, Bobbi is a sexy jazz musician tarted up in classic cabaret duds, as well as an aggressive modern woman whose thinking around relationships blur the lines for the entire family. Kliffer’s animated performance creates a blithe and hapless puppy to her cat.
Simon evokes a hilariously daft and gullible Janey Fluck, a ’50s princess resplendent in crinolines, high heels and saucy hairdo. Yearning for a glamorous life and disappointed in her boring marriage, she is completely bamboozled by the neighbourhood bookie and con man, Beverly Woytowich, who had followed Gary over the fence to collect his outstanding debts. Played by Brad Austin, Woytowich uses grandiose language to regale Janey with tales of travel, adventure and style. He also manages to enchant Hilda – at least outwardly. And in the end, we are left wondering who is conning whom.

Hilda’s Yard is playing at the King’s Wharf Theatre – Penetanguishene until July 9. It then moves to the Huron County Playhouse II in S. Huron from July 14 to 30th