Soulpepper’s production of 39 Steps – Patrick Barlow’s 2005 adaptation of John Buchan’s 1915 novel – is fun, frolicking and witty. While the tension, passion and intrigue of Hitchcock’s 1935 film version lurks beneath the surface – this play is closer to Monty Python than a suspense movie. Fresh from his refreshing role in Incident at Vichy, the multi-talented Kawa Ada took the lead role of Richard Hannay – an innocent man plunged into the London underworld – after a mysterious woman was murdered in his flat. Like Alice in Wonderland, or Dorothy in Oz, he was forced into an unfamiliar terrain where he encountered weirdos wherever he went. 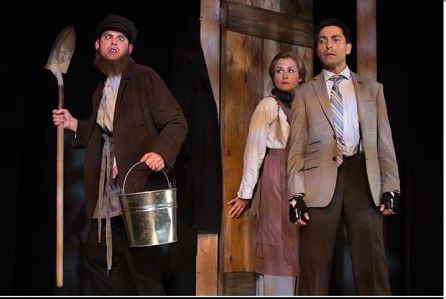 Of course there were love interests. Raquel Duffy played all of them – so well it was hard to recognize that she was the one taking all the roles. In blond or black wigs – high heels and sophisticated dresses or dowdy farm clothes – she perfectly embodied each role she took on – changing her diction, body language and gestures along the way.
All the secondary roles – and there were so many – were played by two exceptionally talented actors. Anand Rajaram and Andrew Shaver changed costumes faster than a flea could jump, and their amazing transitions between characters were depth defying. Both of them nailed their respective alter egos with grace and precision – speaking with authority and conviction in their new personas as inspectors, vaudevillian entertainers, innkeepers, farmers, professors – even if their roles only lasted for two minutes.
On top of being an excellent conductor of so many rapidly changing scenes and situations, director, Ravi Jain, proved himself to be an excellent movement coach and choreographer. During an extended scene on a train – the two supporting actors, and Ada, gyrated, pitched, groped, balanced and twirled – in positions a gymnast would envy. And Duffy’s Scottish jig, while balancing an extra long pole across her shoulders – with jackets and hats balanced on both ends –  must have taken lots of practice.
André du Toit’s lighting was exquisite – Ken MacKenzie’s set design – earthy and symbolic. Verne Good’s authentic sound grounded the experience. Together the three designers put the audience on the train – rocking back and forth and experiencing the urgency of Ada’s furtive flight.This production is a hilarious journey into pure British farce. Soulpepper has had to add extra performances. 39 Steps is playing at the Young Centre until August 27th.
BTW;  John Buchan, a nom de plume, was really Lord Tweedsmuir, Canada’s Governor General from 1935 – 40!