All eyes were on Nicole Underhay as she demonstrated the muscle, power and competitive spirit of Olympic sprinter- Usain Bolt. She outran the pack in the Shaw Festival’s production of Mrs. Warren’s Profession with the style and grace of the gold medal runner. While Underhay was clearly capitalizing on playwright George Bernard Shaw’s brilliant speeches, she was taking their impact to a whole new level.
The role of Kitty Warren has its complexities – testing the emotional strength of the most seasoned actor. The brother Madame must be a genius entrepreneur, a cool-headed manipulator, seductive, warm-hearted, maternal and generous.   Photo by David Cooper 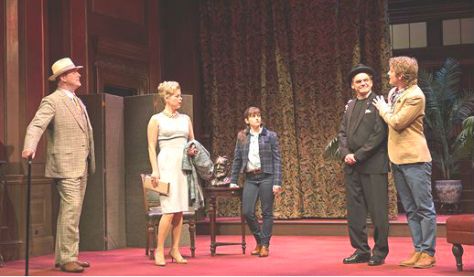 Underhay embodied these qualities so skillfully that she even convinced the audience, by the end of the play, to run with her. She effectively communicated the rage and the anguish of the underprivileged with such compassion and depth that the viewers could not turn away.
Mrs. Warren’s profession is more than just a play. It’s a political tract. Shaw is wooing the audience into questioning middle class morality and an economic system that disenfranchises the poor. It was so “hot” when first written in 1893 Britain that the United Kingdom banned productions of the play for close to 30 years.
Director, Eda Holmes, did a superb job of heightening the essential elements of the drama. The role of Underhay’s daughter, Vivie, played by Jennifer Dzialoszynski, who questions her mother’s motives, was restrained, allowing for the Madame’s viewpoint to be enhanced. The supporting male characters: Thom Marriott as Sir George Crofts; Wade Bogert-O’Brien as Frank Gardner; Shawn Wright as Reverend Samuel Gardner and Gray Powell as Praed became exaggerated, comedic caricatures of male types – Marriott the lustful, rich older gentlemen who tries to buy female favours; Gardner the charmer who refuses to work and seeks a rich wife; Wright the pious hypocrite and Powell the perceptive artist. The male interactions seemed like amusing subplots while the tour de force duet between the two females took centre stage.
This is a masterful production with Underhay undoubtedly winning the race. Mrs. Warren’s Profession is up at the Royal George Theatre in Niagara on the Lake until October 23rd.