The Ring Cycle is one of the longest pieces of theatrical performance in recorded history coming in at approximately fifteen hours long. To put that into perspective, the final part of the entire four-part cycle, Götterdämmerung, was about 330 minutes including both intermissions. This length is not for the faint of heart and I highly recommend being very interested in Wagner’s music and the German language if you have any notion of seeing this show. That being said, it was an absolutely lovely performance and if given the choice to see the rest, would at least, see the parts I know from my childhood. 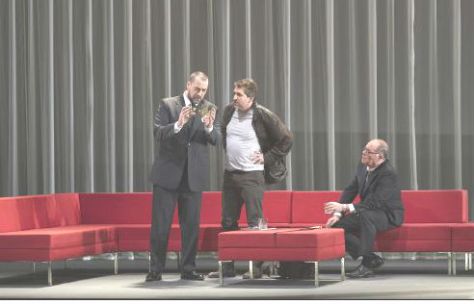 Like all opera, the lighting was dramatic, bold and stunningly subtle throughout the show. The use of the scrim lighting for the scenes on the Rhine river giving it an otherworldly and underwater glow through the top portion of the set was marvelous.  The back light used to accentuate and create the modern “superhero” look with the fluorescent lights flown in from above the stage to create the stark business world of the Gibichung household was clever and the ingenuity of David Finn certainly does not go unnoticed.
The leading lady herself, Christine Goerke played Brunhilde, the Valkyrie punished by Woten to be surrounded by flames until someone would brave the fire and claim her as a wife. Her performance was breath taking and expressed her sorrow in being betrayed by her lover and husband Siegfried. Played by Andreas Schager, he brought a jovial and lighter air to the performance that complimented Goerke well. The treacherous Hagen was played by Ain Anger whose bass voice was resonant with the evil intentions of the character and brought a rounded out musical feel for the show.
This beast of an opera is no small task to put on or to simply watch it in it’s entirety. The Four Seasons on opening night arranged a small lecture about the history behind the show and how to enjoy it without feeling fatigued and to keep your energy up during the incredible length. If you really feel up to it, I would recommend mentally preparing yourself before going to see this show. But as always, I will say that anyone and everyone should enjoy theatre, and just because the length is daunting, doesn’t mean you should write it off right away. Götterdämmerung will be playing at the Four Seasons until February 25th.