At the end of the summer, you’re probably back from your cottage after a relaxing time of doing a whole lot of nothing while enjoying the lovely weather and trying your best to ignore the awful bugs. After getting back home, what better way to start off the fall and school season, than to go see a show reminiscing about the time you just came home from? Ernest Thomson’s “On Golden Pond” is a slice-of-life show about an elderly couples’ time spent in the twilight years of their lives at their family bungalow. 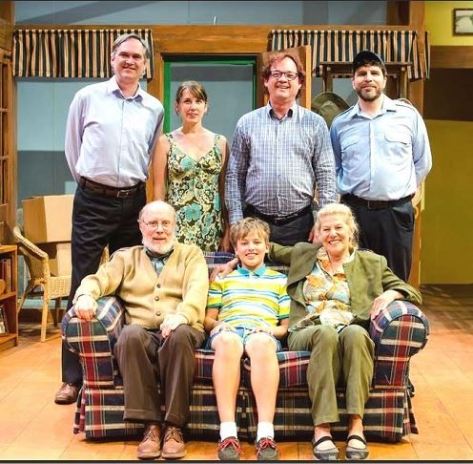 the folks who live or visit ‘On Golden Pond”

The tone is slightly put off by the underlying tones of forgetfulness displayed by the husband, Norman Thayer played by Chris Hardess who seems to be suffering from early onset Alzheimer’s while the wife, Ethel Thayer played by Katherine Tomlinson tries to get her husband to engage with the quiet world of the lakeside community while constantly worrying about his health.
Located on the rustic Golden Pond, Maine, the set itself reflects well the style of cottage country , depicting all the trademark novelties of the classic cottage. Board games older than dirt, furniture that seems to be even older than that, wood panelling and a swinging porch door that falls off it’s hinges as soon as you first arrive are all such details that set designer Anthony Jones and set dresser/décor artist Katherine Turner show off.
Although I feel that the script has great opportunity to talk about some very hard hitting subjects, such as the onset of Alzheimer’s and how people deal with it, and how families can become distant with each other. Because of traditionally old fashioned views on how to raise children, it does do well to be a relaxing time of seeing an older couple coming to terms with their mortality and fixing past relationships before it’s too late. The show lets you see a touching reparation of what could be presumably years of lack of communication between father and daughter (played by Kerrie Lamb).
For those wishing for an opportunity to reminisce about their own happy times this summer, this show will be an equally calm and relaxing time as when you were out there yourself. On Golden Pond will be playing at the Scarborough Players until September 23rd.