The mark of a top-drawer orchestra is its ability to successfully interpret a range of genres and under diverse conductors. The Hamilton Phil’ exhibited both these talents in presenting a cornucopia of familiar melodies of the season, and under the guest baton of Lucas Waldin of the Edmonton Symphony.
Regardless of one’s religious background or affiliation, the ubiquitous Christmas music is familiar to anyone with a radio or a visit to the mall or grocery store. To make an on-stage reprise thoroughly enjoyable surely is the mark of genius. Last night’s concert certainly achieved this level accolade on three different aspects – aural; visual and imaginative. 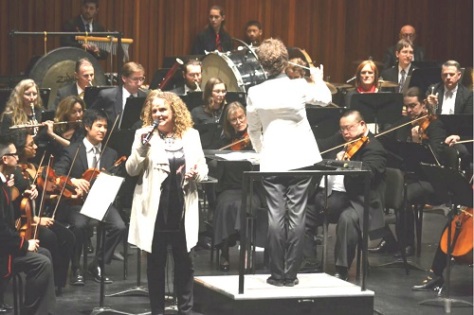 The Philharmonic’s musicians were enhanced by the twelve members of ‘The Bronze Foundation; a hand-bell performing unit. The sound is unique and certainly suited to this time of year, and under the tutelage of leader Rick Humphrey, also manage to perform with an exceptionally interesting sense of visual style. Their opening presentation was Carmen Dragon’s arrangement of ‘The First Noël’. A little trivia; the arranger- conductor of the Hollywood Bowl orchestra is also known as the father of Daryl -‘The Captain’ of “The Captain & Tennille” recording duo.
Maestro Waldin conducts with an energy that transmits itself to the orchestra as well as to the more attentive audience members. His touch is both light and melodic yet firmly in control. Leading musicians as a guest is always a challenge both in rehearsal and in presentation…he makes it look easy. His reading of three excerpts from Tchaikovsky’s ‘Nutcracker’ was innovative, especially the rendering of ‘Sugar Plum Fairy’ that utilized the Celeste. The work’s ‘Russian Dance’ , given a Krakoviak-ish treatment was impetuous and emphatic. There were certain outstanding soloists especially the piano/Celeste physically-challenging efforts by Krista Rhodes.
The guest soloist was Heather Bambrick; a successful jazz musician and commentator on FM radio’s 91.1 where her humour and knowledge are succinct (as opposed to the verbiage of her CBC counterpart). Her soprano voice washes over her audience like the softness of cotton candy; her faultless clarity carries across the full spectrum of her range. Most impressively, her personality shines through every note. We were especially taken with her reading of ‘Gesù Bambino’ accompanied by Rhodes (whose resume should mention that she was an O.A.R. Contributing writer!) Bambrick’s ‘White Christmas’ rendering expressed an almost wistfulness that brought new emotions to the familiar piece.
Post interval was ushered in by a dramatic procession of the Bronze Foundation members entering from the Hall’s rear and ringing a theme until all were on stage. For a rendition of Leroy Anderson’s ‘Sleigh Ride’, the HPO was augmented by the full complement of the Hamilton Phil’ Youth Orchestra, totally filling the First Ontario Place stage. Waldin surrendered the podium to the HPYO’s Colin Clarke who led the hundred-odd musicians in an amazing cohesive assemblage. Clarke’s ebullient and contagious optimism as well as his total commitment to next-generation orchestral careers make this undertaking more than just worthwhile.

Waldin; Bambrick; the HPYO; and the bell-ringers then drafted the entire audience as a choir for some popular carolling; then a standing ovation and some insistent curtain calls. This was truly an upbeat evening and Waldin’s expressed good wishes for the season and the New Year was heartfelt and mirrored the other 100-plus folks on stage.

We were especially pleased to learn that this was a totally sold out evening. Bodes well for the H.P.O.’s 2018 season.