A recital entitled “If music be the food of Love” featuring soprano Helene Brunet and lutenist Sylvain Bergeron was presented in the Sunday Hammer Baroque series of concerts.  Most of the music presented was by Henry Purcell (1659-’95), who has been called the greatest English composer until Elgar.  He certainly was a towering musical figure of his time and wrote music both for the Catholic King James II and for the Protestant monarchs William & Mary – no mean feat in that divisive day and age.  Like many great composers he unfortunately died young, at 36, so we must savour what he created. 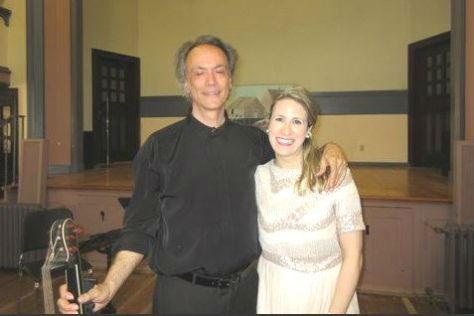 The recital began with works from two of Purcell’s semi-operas,  The Fairy Queen based on Shakespeare’s Midsummer Night’s Dream; and King Arthur, a retelling of the Arthurian legend.  ‘Now the night has chased away’ was a happy start leading to the calm longing for Avalon of ‘Fairest Isle’ from King Arthur.  “If Love’s a sweet passion” showed off Brunet’s impressive range and involvement with the music while being ably supported by Bergeron.   It was obvious in the opening three pieces that both musicians knew and loved Purcell and were able to do his music justice.  A very stately and controlled Evening Hymn was followed by a lively and very demanding, especially for Brunet,  Strike the viol.  This was followed by lute solos of Italian dances Toccata, Corrente Francese, Gagliarda by that prolific and long-lived composer – Anonymous!
Bergeron managed to make these three very different pieces sound deceptively simple even though they ranged from folk dances to courtly formal offerings.  During a short break Bergeron said he had just spent time in the orchestra pit playing for Opera Atelier in Toronto, so playing a recital in a relaxed setting for him was like getting out of jail for the day.  Both he and Brunet happily answered questions from the appreciative audience.  Bergeron said his 14 string lute was actually a very stable instrument which did not need re-tuning often, but it did need to be changed for the different pitches of instruments or voices it accompanied and the re-pitching takes time.
The recital continued with two pieces from Orpheus Britannicus and then the First and third versions of ‘If music be the food of love’ which were really lovely.  More lute solo Italian dances followed and again the three chosen were very different starting with simple lilting music, moving to more lively, complex dances and lastly on to a formal courtly dance.  Two more gorgeous songs from the Fairy Queen brought us to the final song – From silent shades and the Elysian groves from Mad Bess of Bedlam.  Purcell shows the English fascination at this time with insanity and asylums.  Judging by the song Mad Bess was right to prefer the marvellously delusional Elysian groves to the intense and demanding reality others wished her to embrace – move over Mad Bess and we’ll all come with you.   An encore was requested and Brunet and Bergeron obliged with another version of ‘Strike the viol’ which was gorgeous and difficult and thoroughly enjoyed by both the performers and the audience.    The next Hammer Baroque concert is 4pm- May 19th at The Rock on Locke.