Yaga, written and directed by Canadian playwright Kat Sandler, brings the old Slavic story of Baba Yaga to new, modern life in a combination of fairy-tale, comedy, mystery, and a commentary on gender and aging. The play opens the Tarragon’s 2019-220 season. With impeccable, often brilliant acting by the well-known Seana McKenna and by Claire Armstrong and Will Greenblatt, the play is fast-paced and funny as well as thought-provoking.  For those who do not know the legend, Baba Yaga is a Slavic version of the mythic witch — seen as old, ugly, cruel (rumoured to eat children). 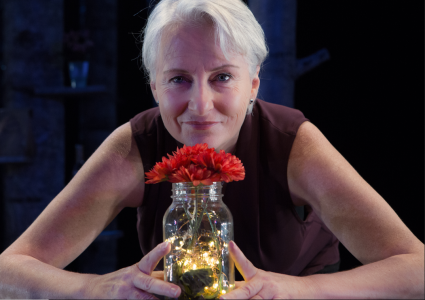 Seanna McKenna In YAGA
Lonely, she lives in the forest, in a hut standing on chicken legs, and flies about in a mortar and pestle. Sometimes she is a trio of three sisters. In this play, she could be trio of Maiden, Mother, and Crone — the three aspects of woman.
Historically, persecution of witches in Europe and in the U.S. demonized the “wise women,” healers and seers: women both young and old who possessed power outside the bounds of religion and patriarchy.  As she embodies both the original Baba Yaga’s spirit and her modern incarnation, Katherine (an attractive, 60-ish professor with an interest in old bones and unusual creatures), McKenna shows that “witches” can be sexual and seductive, daughters as well as mothers, helpful as well as malevolent. She says that older women want to be seen and known, not be invisible (as we — writing as an older woman myself — often are).  In the program notes, Sanders says that Baba Yaga is “a morally ambiguous, complex female character…who does what she wants in the woods and refuses to be defined or labeled as one thing, and I think that is why she is so resonant with women today.” Writing about witches from various sources, is a tempting subject for women writers; I have written several poems and short pieces from the point of view of witches in fairy tales, trying to reveal their range of human emotions.  So the play intrigued me even before the curtain rose.
The major part of action takes place in a series of short scenes, in which McKenna, Armstrong, and Greenblatt play a variety of roles. The plot concerns the disappearance of a university student, Henry, and the efforts of a private detective, Mr. Rapp, to find him, working together with a woman detective in the small university town.  Greenblatt plays both Henry and Mr. Rapp, showing the two men’s differences and also their connections. He plays both roles with energy and skill. Armstrong plays the detective, Carson, and several other women (including Henry’s ex-girlfriend), and makes each role unique and interesting; she is an actor to watch. McKenna, as mentioned, plays the professor Katherine, who captivates both Henry and Rapp. She also portrays other characters — from Katherine’s elderly mother, a healer who lives in the woods, to a cynical café owner, to a truck driver — and brings each character to memorable life, through her voice, gestures, and intensity of focus. Using just three actors for many roles helps create a sense of shifting reality.
The set, designed by Joanna Yu, represents a “forest” of white-birch trees, with tables, chairs, and various props (dishes, glasses, etc.), which are moved about the stage to show a police station, café, apartment, hospital, and similar interiors,  as well as a cabin in the woods. The actors move well within this set, and I like the way the woods surround (and haunt) the interior scenes. Yu also designed the costumes, whose colour and style helps define the characters. Jennifer Lennon’s lighting sets the mood for each scene, as does Christopher Ross-Ewart’s sound design.
As in Sandler’s previous plays (e.g. Mustard, produced at the Tarragon in 2016 and 2018), the dialogue is witty and provocative.  Each scene works well, but the script could do with a bit of cutting, especially in the first act. Sandler interweaves modern life and ancient tales, including the story of Ivan and Baba Yaga; this often works well, though, sometimes she struggles to keep all the threads together. Nevertheless, the play is well worth seeing. I won’t disclose the rapid-fire surprises of the climax — but they will keep you on the edge of your seat. Yaga suggests that the world of myth and fairy tale is real and still affects us; we ignore it at our peril.

Yaga is at the Tarragon Mainspace through October 27th.