Under maestra Gemma New, the concert programs of the Hamilton Philharmonic are nothing if not eclectic. Old masterpieces are partnered with contemporary and even commissioned works. Last evening was no exception. ‘Silk Road’ by Alice Ping Yee Ho is subtitled a fantasy, and it certainly is. The work’s three movements all try to evoke differing aspects of what was the trade route from the Middle East, through Persia, India and thence to Asia. Naturally, the intro describes the Nomadic atmosphere. Glorious and effective, her scales bear a resemblance to pentatonic rather than Bachian. Short staccato riffs with melodic viola & celli are underscored by intense demand of the percussionists. 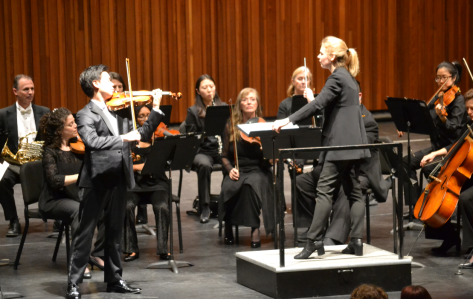 Chooi & New performing the M ozart concerto #5 with the HPO

This piece is not only listenable, there are so many tonal subtleties that the work will enjoy numerous perceptions.
In keeping with the world atlas concept, guest soloist Timothy Chooi selected Mozart’s violin concerto No. 5. This opus is subtitled ‘Turkish’ and although designated A major, it often changes to the minor key. Chooi’s style is physically animated yet still intense and focused. The 90-120-second solos in each movement were so spell-binding as to show visible and concentrated observation by his other orchestra counterparts…including Ms. New. The melodious adagio 2nd was read with almost affectionate tenderness that was underscored by trills and vibrato. The finale rondo, familiar and popularized by the commercial classical ‘lite’ stations was performed dramatically and with verve.
His next piece was John Williams’ theme from ‘Schindler’s List’. Williams, along with Rachmaninoff & Leroy Anderson are the three favorite contemporary composers of the Gaisin household. This motif has all the pathos and drama of the story & movie and Chooi expressed both in his interpretation.
Post-interval, Mendelssohn’s fourth symphony. In our personal musical library, this is (along with LVB’s #1-9) one of our ‘most listenable CD’s. The 4th is subtitled ‘Italian’ and Ms. New’s erudite introduction, including brief theme renderings, portended how she and the HPO would present the work. The opening move was plagiarized (stolen) by TV show series and thus is as familiar as the William Tell overture. There are pastoral moments, evocative periods and orchestral challenges throughout, especially during the popularized moderato third. We both had trouble NOT humming along with the melody. The 2nd movement was interestingly more andante than con moto; thus the interpretation was creative.

Our H.P.O. And its artistic director is certainly a definite contributor to Hamilton’s stature as a cultural entity. Before Ms. New is offered the podium of the Vancouver, OSM, NAC, Chicago, Boston or New York Phil. and we lose her…let’s get some of this terrific talent down on CD’s. It can only enhance our town’s international reputation.