Two emotional events:- the Hamilton Philharmonic’s musical acknowledgment of Remembrance Day and THE CANADIAN BRASS as guest performers. The former touches both of us as we can remember the days of WWII. Air raids; rationing; slit headlights & blackouts and especially the black sedans that would drive into the neighborhood and disgorge two military types and a priest, minister or Rabbi. That always brought out everyone in sympathy. As for the ‘Brass’ we brought along their 1980 album with Leona Boyd & Erica Goodman. Obviously we’ve been fans for decades. Finally got the album jacket autographed. Traditionally, the concert was opened by the RHLI’s Regimental Band. 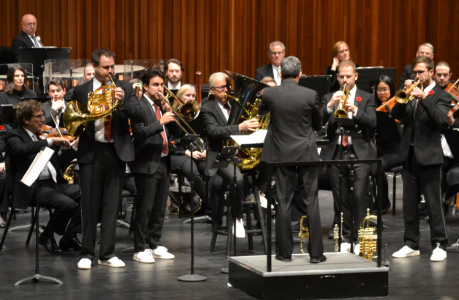 “The BRASS” and HPO under maestro Giuseppe Pietraroia’s baton

The pomp, uniforms and discipline that the band exhibits invariably causes one to sit straighter and pull shoulders back emulating a militaristic ‘attn-hut‘ position. Our participatory singing of ‘O Canada’ was far more than just paying lip service. This emotional state carried on while the Philharmonic under guest conductor respected maestro Giuseppe Pietraroia of the Victoria Symphony & Pacific Opera; performed Elgar’s Pomp and Circumstance No. 4. His style and musical interpretation mirrors that of the orchestra’s resident Gemma New, so the end product was superlative.
The Canadian Brass was formed almost fifty years ago. Tuba player Chuck Daellenbach is the last of the originators still performing with the quintet. The white sneakers; stage entry from within the audience, and the droll commentary & banter are still the iconic mainstays of the group… and also – their faultless technical mastery of their instruments. Their creative renderings of both classical and popular melodies guarantee an audience ‘sold out’ situation every time they perform, and last night was no exception.
To underscore the above, the quintet chose the celebrated Bach Toccata & Fugue in D minor. Definitively, toccata translates as ‘touch’ and is utilized to demonstrate a performers’ virtuosity. Arranging an orchestral piece for five performers all playing within the same ensemble family may seem arduous, but the result made it seem as though even J.S.B. himself might have augured such an adaptation. Their arrangement of Marion Handy’s (think W.C. Handy) “Beale St. Blues” personified the Memphis style of Blues genre with its deficiency of lyrical repetition (almost like folk music dialogue).
The most memorable offering pre-interval was a five-part composition by Jeff Tyzik titled “New York Cityscapes”. Vaguely reminiscent of Bernstein’s West Side Story suite, this work with its hypnotic imagery captures the very essence of the city and the vitality of New Yorkers themselves. The percussion team utilized sirens, horns, and whistles to bring a realism to the reading.
A dramatic fanfare opens the John Williams “Summon the Heroes” composition and this was followed by a superlative rendering of excerpts from ‘Sleeping Beauty’ and ‘Carmen’. Then two works arranged by Eastman graduate Arthur Frackenpohl who past away four months ago. His rendering of compositions by Di Lasso and Gabrieli seem specifically tailored for such ensembles as the Canadian Brass. Three versions with liberties taken of Lennon/McCartney pop pieces were followed by an outstanding ‘Saint’s Hallelujah’ which one imagines is performed by every funeral processional in New Orleans. We both quietly sang the doggerel additional verses we remembered i.e. ‘Saints played rock & roll’; ‘Saints danced Cha Cha Cha’; Saints mocked Mardi Gras etc. Lots of fun, full house and the snow held off.