Considering this scribe’s sixth decade of writing about classical concerts, it seems like I’ve heard every work in the genre. Not so, Last night we finally had the opportunity to hear something novel. The Hamilton Philharmonic’s opening work was Rossini’s Semiramide overture. Composed two centuries ago, the tragic libretto deals with the Queen having to choose an heir to her throne. Final act screw-ups result in her and those around her all dying. The longish overture (14 minutes) incorporates actual themes and arias from the opera and is a toe tapping work that like ‘Bolero’ offers multiple opportunities for individual instruments to shine. 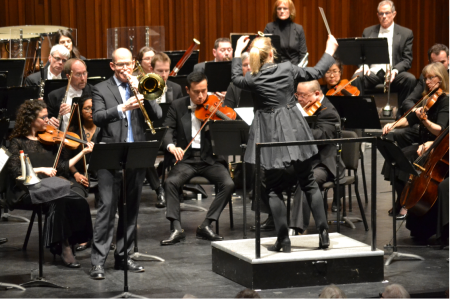 Opening with mournful horns the piece is vibrant and rousing with crescendos that give the audience false expectations of the actual finale. The HPO’s conductor Gemma New and musicians aced the piece to perfection.
As for my first-time treat. Henri Tomasi’s Trombone Concerto was utilized as a platform to display the talents of the orchestra’s principal trombonist, David Pell. I first heard of the composer from interviewing Jean Pierre Rampal in 1961, who regularly would perform Tomasi’s flute concerto. Pell is technically faultless and comfortable with the work’s rather melancholy motif. From its bucolic opening the mood changes pace requiring instrumental mutes for effect during lilting riffs. The finale is jazz-like with a parry and thrust musical dialogue. Tomasi’s movement designation ‘tambourin’, refers to the French or Egyptian instrument as well as a dance or compositional format. The piece is interesting and certainly a showpiece for the soloist. Nor wonder Pell has become a stalwart of the orchestra.
Post intermission; Rimsky-Korsakov’s symphonic suite, Scheherazade. This is one of the pieces that seems to be in everyone’s record collection. The composer also wrote the Capriccio Espagnol which is another genus standard. This work has four interpretive melodic themes which are inter spaced by a solo violin melody that represents the Arabian princess’s staving off execution for another day. Concertmaster Stephen Sitarski’s talent shone in these episodal moments. There were some standout individual solo opportunities for Erica Goodman’s harp , some long clarinet & flute moments that all contributed hauntingly beautiful theme renderings. Our seatmates all agreed that the work was so magnificently performed that if it were to have been encored in its entirely; it still would not have sufficed. This was an “A-Team” presentation and worthy of any of the so-called major orchestral assemblies.
Mention needs to be made about maestra New’s commentaries about the works being performed. She speaks with humor , tongue-in-cheek expressions and nary an ‘Uhm’ to be heard. That she is a GEM is not written as a pun on her name. Our city, orchestra and community are all better for her involvement.

Personal trivia; back in the seventies, when I was involved with the chemical industry and writing was a sideline; one of the other employees, had attended his first classical concert and knowing of my interest wanted to tell me all about his experience. When questioned about what he heard, he mentioned Scheherazade but his best recollection as to the composer’s name was “Rinkey Dinkey Korkanov”. The muse and I always exchange a smirk when we recall this funny episode!