The Theatre Arts Faculty of Sheridan College has always incorporated the concept of creativity as part of its curriculum. Actors are not automatons; they must integrate something of themselves into every portrayal. This is certainly a manifestation of creativity. “CENTRAL PARK TANGO” and “COME FROM AWAY” are two innovative original works that are being staged until April 24that the College’s Trafalgar campus. 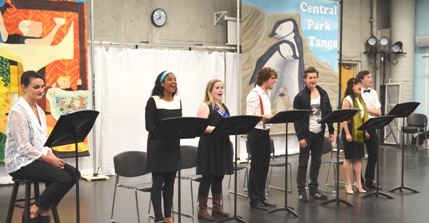 “Come From Away” was, and is still being – created by David Hein & Irene Sankoff. It musically examines a roman-a-clef about the effect on Gander NFLDers by the deflection of aeroplanes on 9/11/01. Incorporating idioms, traditions, lifestyles, & Newfoundlanders themselves, brings realism to a traumatic moment for both unanticipated guests plus reluctant hosts alike. We see the situation from pre-event townspeople; unknowing passengers; airport staff; back to the locals. We’re then made to appreciate the apprehension of those finally allowed to de-plane in a strange country among bizarre inhabitants. The imaginative staging and props, especially the flashlights bring a visceral response from the audience. The fourteen member cast is complemented by Down-easter Steafan Hannigan- percussion; the writer himself on guitar; Pat Simonds (3 instruments) & Saskia Tomkins on strings.
That Tuesday morning, I vividly remember being on the phone with my post-radioactive thyroid treated daughter & we both happened to have our TV’s on. Danny was on-site (on escape vessel) at a ‘Relic Hunter’ segment’s taping. Eighteen weeks later he was deployed as a rescuer with the American Red Cross at Ground Zero. Thus, the subject itself intrinsically touches us. This adaption is so inspired that the vehicle too touches us in its retelling. Definitely another hit with great potential for creator Hein.