P.T. Barnum is the subject of Mary Vingoe’s “LIVING CURIOSITIES, OR WHAT YOU WILL” and insightfully tells the saga of his New York Circus Museum, circa 1864 through the eyes of Anna Swan, the eight foot tall Nova Scotian who was one of his ‘Freak Show’ displays. The intrigues, attitudes; relationships and personalities of Barnum as well as those of his abnormal oddities make for a provocative theatrical subject. Theatre Erindale; its director and cast ace such a demanding challenge. Photo by James Smagata 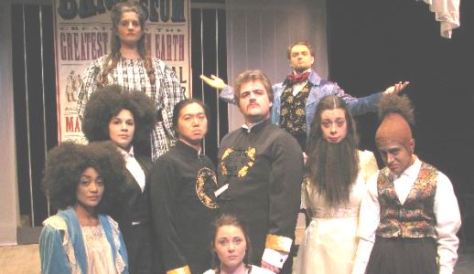 The cast of “LIVING CURIOSITIES”

This scribe is positive about having seen the play at least once before, but on searching my files can’t find where, when or by whom it was previously staged. Hence, this column’s title.
Barnum, (like Celine Dion), enjoyed a love/hate reputation. He was a politician, a showman, philanthropist, a major hoaxer and strong abolitionist. He also was as mercenary as hell. To capture someone so complex, director Sten Eirik chose 4thyear student Samuel Turner who surprisingly underplays his portrayal. No overt bombast and only a slight dose of chutzpah to articulate his character. Eirik’s creative blocking has Turner stand on a raised portion of the stage when he’s lording his proprietary position over the giantess, but when she shows her indomitability, they’re both standing on a level, thus, Barnum has to crane his head upward… a powerful descriptive & symbolic paradigm.
Miss Swan is played by Hannah Vanden Boomen on a set of construction worker’s stilts. Seeing her sit, stand, or bend while on these contraptions boggles the mind. Interestingly, even though the audience is witness to the entire cast getting into costume at opening curtain; the representations soon become the reality. One of the Barnum-created personas is portrayed by Jovan Kocic. The figure is supposedly a half-man half-monkey object publicly displayed behind bars. In reality, he is a stuttering pin-head who is also a sycophantic minion who spies on the other freaks for Barnum. Kocic imbues his persona with a philosophical acceptance of an almost inhuman history of bullying and mistreatment.
All the depictions are immaculately executed with a credibility and insight that reflects the highest thespian standards. The challenge given to Aaron Schaefer & Anthony Raymond Yu to depict the antagonistic Siamese Twins is offset by Eirik’s decision to permit a little hilarity into their shenanigans. None of the representations seem contrived. The intensity of the monologues and dialogues forcefully impact on the audience.
However, there are two actors whose portrayals are artistic standouts. ‘The Bearded Lady’ is an over-laudanum-ed Courtney Keir whose immaculate French accent and total immersion in her character bestow an absolute credibility to her reading. Posture and phrasing all contribute to a completely illuminated persona. ‘Alphonsia’ is the younger of two Albino Negroes from the Carolinas and Mercedes Morris brings full measure of emotion and physical interpretation to her role. Her face traverses the total range of sentiment she endures. Her feelings toward her sister; her regard for tall Anna; and her sense of self-worth are visceral.   Note: -A little familiarity with Shakespeare’s’ Twelfth Night’ is a comprehensible benefit.
Major components of staging Living Curiosities are contributed by the crew. The set designed by Patrick Young is unusually detailed for an Erindale undertaking. That a smallish stage can mirror an office; a sideshow rostrum; bedrooms; a basement and a street venue is artistic creativity as its experienced best. Joanne Massingham’s costumes are not only visually impacting but are major contributors to the overall impression of the play. The lighting and sound demands (created by James Smagata & Keith Whiting) on Gregory Guzik and Alessa Dufresne all require much more than just threshold perfection and they are faultless. The backdrop posters are worthy of post-run auctioning-off like the artwork displayed in the lobby.

LIVING CURIOSITIES runs until Mar. 22nd ; next Friday’s performance will include a reading by playwright Mary Vingoe herself. This play has already been included in our O.A.R. TOP TEN candidates list…don’t miss it.